What is a Tow Truck?

This type of truck is designed to pull vehicles that have either facing breakdowns or mechanic defects on the road. In order to haul a vehicle, the tow truck is designed with a special equipment that can pull a heavy vehicle. The equipment was traditionally a hook, which is used to hook the towed vehicle. Over the years, innovation and improvements are made to the towing equipment. A tow truck is also known as a wrecker, breakdown truck or recovery truck. Tow trucks have become an important part of our everyday lives.

Inventions are common results of solving existing issues. Through the process of problem solving, people found productive solutions. In 1915, Ernest Holmes, while on his daily duties, was called to assist his friend whose car had been wrecked and stuck at a river in Tennessee. Holmes and his other friends were trying to pull the vehicle by tying ropes to it and pulling them to the surface.

They spent around 8 hours trying to pull the vehicle up with the ropes but was struggling with the heavyweight. This inspired Homes to build a vehicle that can pull other automobiles more efficiently rather than using manual labor. Holmes built a towing vehicle which was equipped with three metal bars and an attached wheel with a chain. The first tow truck was then born.

From the beginning of first tow truck until modern times, the tow truck has undergone a lot of changes and improvements, and have evolved significantly. During the development of the tow truck, various appearances, transformations numerous characteristics have emerged. In the following, we shall discuss five different types of tow trucks.

This tow truck type of equipment comes with a boom winch equipment which can be used to haul damaged or broken down vehicles from a ditch or any place that can be difficult to reach.

This is a traditional type of tow truck where chains are used to place around the frame of the towed vehicle and pulled by the tow truck. There is one major problem with this towing method; it can possibly scratch or damage the frame of the vehicle. This is also the reason that most towing companies will only use this method for towing junk cars.

This is a modern towing method where the tow truck has a ramp or platform at the back of the tow truck, which is known as a flatbed. The hydraulics allows the ramp to be lowered or raised from the ground level. The towed vehicle can either be pulled by a winch on the flatbed or simply driven up the ramp. The possibility of damaging the towed is extremely low; which is why flatbed towing is considered one of the safest towing method.

This is a tow truck that has a combination of a boom and wheel lift in one unit. This tow truck also can be used for rescue missions, wrecker recoveries, medium or heavy duty towing. 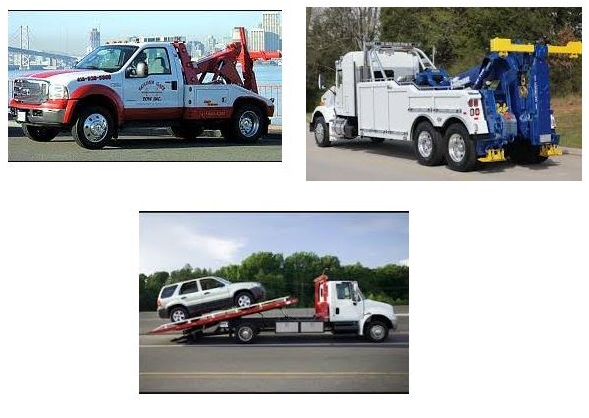